Only By His Grace, Only For His Glory 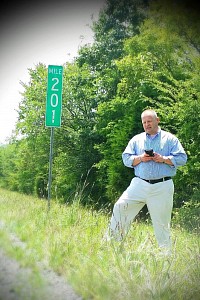 What took place on August 7, 2011 on the side of I-59 South Mile Marker 201 between Chattanooga, TN and Birmingham, AL, can only be explained as a moment in my life when the Creator of Change, Implemented Change, in the life of someone the world thought would never change.  For it was only when I finally realized, resigned, and relinquished the will and the war of my life to the preeminence of Christ, that He did something for me that I had tried for ten plus years to do for myself.  You see, what took place in my life on that August evening in 2011 on the side of the interstate, can only be explained as the God of Heaven doing what Tim Trivette Could Not Do, and what Only the God of Heaven Could Do.  Praise His Mighty Name, I can promise and proclaim to you with all certainty yet still today, that when the Hopeless find Healing, and the Failure finds the Fix they’ve been longing for in Jesus, they just can’t help but shout it and share it with all who will listen that there is indeed Hope for the addict, and that because of His Grace and only for His Glory, we can tell them exactly where to find it!

My heart’s desire is that all who listen to “The Tim Trivette Story”, would see clearly past the captive, and be completely positioned on and penetrated by Him who set this captive free.  Oh to God that He would allow all who hear be pointed to the Savior rather than the Sin, the Pardon rather than the Prison, and the Freedom found only in Christ rather than the Failure I had created.  My prayer is that the testimony of what God has done in my life will Encourage the Captive, Enlighten the Critic, and Energize the Christian to join me in doing everything we can to brag on Jesus, make much of Jesus, and tell those held captive by the sin that is addiction, that the Grace of Almighty God is indeed a Really Big Deal to those who have witnessed it first hand.  More importantly, that someone somewhere would hear the old old story of the Gospel, understand and believe in their heart that Jesus came to this earth for them, was crucified on Calvary’s Cross for them, conquered death, hell, and the grave for them, and will one day be coming back for all the whosoever’s that have made the life changing decision to call upon the name of the Lord and be saved.

May God use His Work and His Word to draw the lost to himself, set the captive free, and provide the prisoner with a brand new life filled with joy unspeakable and full of glory!  Thank the Lord that the very same God that freed this ole boy is still in the saving and setting free business, and now more than ever, can and wants to do for others exactly what He did for me!  Thank God for the fact that what He did back then He will do time and time again!  Take it from someone who’s been there, done that, and got the t-shirt of a life where sin abounded, that Grace for you too really does much more abound!

That’s why Grace is a Big Deal!